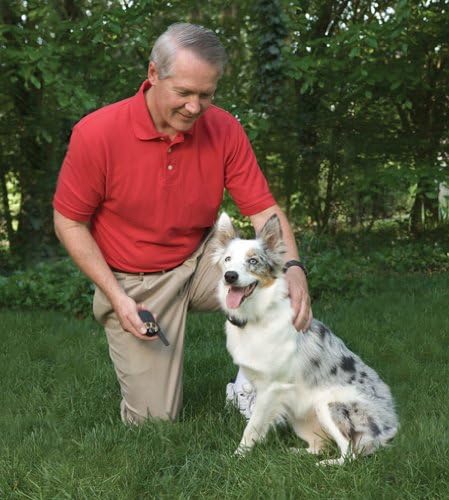 Are you having a hard time getting your dog to come to you when you call him?

Do you have trouble getting him to stay or lie down?

Have you tried an e-collar but without much success?

If so, today we’re going to talk you through how to use an e-collar, also known as a dog training collar, to get your dog to sit or lie down.

Some people have a negative opinion of e-collars. But, this might because they aren’t using them properly.

If used incorrectly, electric dog collars are as much use as a handbrake on a canoe.

When used correctly, an e-collar can be used at low frequencies as a teaching and guiding tool.

A common reason people use e-collars is to train their dog when they’re called. What some people do is put the collar on the dog and call for them to come. But, the dog doesn’t come so they hit the button. Sometimes, this approach does work, it can work.

An e-collar is a dog collar with two metal prongs placed on the inside of the collar which sit on the dog’s skin. Static corrections are electrical stimulations from a current of static electricity triggered with a remote control.

The e-collar, then, is controlled by a remote control that communicates with a transmitter within the collar.

So, maybe you’ll use a higher level or continue pressing the button. From his perspective, he’s probably thinking, “I don’t like this,” and might even run off.

II. Introducing Your Dog To An E-collar

To use an e-collar properly, you need to learn to understand your dog and how he learns. A dog learns commands in the same way we learn a language. When we learn a new language we associate new words and gestures with meanings we already know.

With words, we as humans cannot understand them unless we know their meaning. For dogs, they can’t understand static corrections from an e-collar without understanding what they mean. The tingling sensation is foreign to the dog so they don’t understand.

There’s a simple exercise you can do with your dog to teach them about the stimulation from the collar and what it means.

Starting with four to six feet of leash and the e-collar, switch the collar on and turn the setting down to the lowest setting. Press the button to emit some light stimulation then with a little pressure on the lead beckon him towards you. When he comes, stop the stimulation and make a fuss of him.

The second he comes back to you, release the button. The dog will start to realize that the tingling stops when he comes towards you. After time, when you take the leash off your dog and he tries to walk off you can apply light stimulation which will make sense to him.

In the beginning stages of training your dog, do little bits of training to get him to come back to you. After you have trained your dog to come to you.  You can then use the e-collar for different contexts such as “Come to me,” “Go to your bed,” and “Sit.”

When you train your dog to sit, make sure there are no distractions and that there’s nothing in view of anything he wants. As you’ve already trained him on lead obedience with the e-collar, he already has an understanding of what the static corrections are.

The meaning he needs to associate with the e-collar stimulation with sit, is that when he sits, the stimulation stops.

Dial the stimulation level on the collar to the level that works well with your dog for “Come to me.”

The routine with getting your dog to associate “Sit” with the collar is to apply some pressure on the lead pulling up, and say “Sit” while applying some stimulation.

When he sits, pat him and give him a treat. After you’ve done one of those, give him a freebie. A freebie is where you ask your dog to perform a command with no pressure or manipulation with the leash. If he does the command successfully give him positive reinforcement.

When training your dog flip between the two training methods for the first time.

The next day, you can progress from stimulation and pressure on the collar, to just using stimulation.

Ask him to perform the same command without pressure on the collar, and stimulation. After he performs it successfully, perform another freebie. Always remember to do another freebie after a successful move, so that the dog understands what he needs to do to get a reward.

Every time he reacts appropriately and sits down, give him positive reinforcement.

If he doesn’t sit down with just the e-collar, tighten up on the leash to describe to the dog what they have done wrong. Pull on the leash and say, “Sit” until he understands.

Continue this process for two to three days and then when your dog is getting to the point where they are reacting appropriately responding quickly, you can turn up the stimulation setting to encourage a faster response.

When you turn up the intensity on the collar, the dog will tend to do everything correctly and responsively from then on.

For a dog, the down command is a bit like an off switch, as the dog knows that they’ll be down there for a while.

When you ask your dog to get down, you are asking him to relax and stay in a rested period for a certain period of time.

When training your dog, the down command, have him on a six-foot leash and a flat collar. His flat regular collar will have the pressure applied, while the training collar will emit the stimulation.

Teach your dog the down command from both sitting and standing position.

One thing to be aware of is that if you keep repeating the down command with the sit command (“Sit” or “Get down) he will automatically lie down when you ask him to sit. To prevent this, teach him down from the standing position first, then introduce down from the sit position after.

With the D-ring on the dog’s collar pointing downwards and the remote control in your hand turn the intensity of stimulation to a low level, because this is the first command where the dog has to move into pressure from where it’s coming from in order to turn it off.

At this stage you want to use a lot of pressure with your leash and body, and less stimulation from the collar. You also want yourself to be relaxed and patient, you don’t want to create any anxiety in the dog.

Place your foot on the dog’s lead so that it pulls his neck down while applying stimulation from the collar. Keep asking him to get “Down” and gently press him down towards the ground against your leg.

When he goes down, release the stimulation on the collar and reward him.

Do this several times until he reacts appropriately. After a while you can test him by moving around whilst applying pressure with the collar. If he doesn’t jump up you’ve successfully trained him to stay down. If he does get up, just apply pressure with your leash or hand and the collar.

Keep testing by moving around while he is down. If he gets up, just apply pressure again. If he moves, take him back to the position where he made the mistake so that he understands why you are applying pressure.

If you ask him to sit after teaching him to get down, he won’t feel compelled to straight into a down position.

It’s essential that you remain calm for the duration of the time that you train your dog. If you get stressed or your voice gets raised, take some time out and try again later.

The “Off” or “Leave it” command is very useful for both inside and outside your home. If your dog is a little disruptive and likes chewing objects around the home, or likes jumping on the counter or people, this command helps your dog to understand when he is doing things against your best wishes.

An e-collar allows you to teach him this command while you remain calm, without raising your voice, and without applying any physical pressure on the dog.

The “Off” command can also be used when a dog jumps on you, as well as when he digs in the trash or the back yard. You will need to apply the right level of pressure with the e-collar to your dog’s working level.

As the “Off” command is being used to distract them from something that is really fun to them, you may need to use a slightly higher level than you do for sit and down, because he will be intently focused on what he is doing.

You may need to turn the collar up a couple of settings to get your dog’s attention while he’s doing whatever it is you don’t want him to.

When they approach the object that interests them, apply some pressure with the leash and collar and gently guide them away from it. When they move a way use some positive reinforcement.

Every time you put some pressure on the leash, apply the stimulation. As soon as he stops, release the pressure until he understands.

Once he has grasped it you can move on to other contexts such as “Sit” or “Go to your bed.”

How quickly you train your dog depends on you and your dog. Some people find e-collars so effective they only have to use it once or twice.

It’s important to not use the “Off” or “Leave it” command when passing other dogs in the street or park to prevent the dog developing any confrontational behaviors. You don’t him to associate other dogs or people with the stimulation as this could lead to behavioral problems further down the line. In this situation it is best to use a “Heel”, “Sit”, or “Down” command.

We very much hope you’re now clear on how to effectively use a dog training collar.

Before you go, don’t forget to bookmark BarkVA and come back soon for more great buying guides, handy hints, and all the best products for your beloved pooch. See you soon!

3.6 / 5 ( 5 votes )
As an Amazon Associate, we earn from qualifying purchases - at no cost to you, allowing us to continue our work.